Here is a list of the bestseller books (fiction) of 2017 based on the data from  The New York Times. The books are so interesting that could not limit the list to top 10, and had to add 2 more books to make the number to 12.

From John Grisham, America’s #1 bestselling author, comes the most electrifying novel of the year, a high-stakes thrill ride through the darkest corners of the Sunshine State.

We expect our judges to be honest and wise. Their integrity and impartiality are the bedrock of the entire judicial system. We trust them to ensure fair trials, to protect the rights of all litigants, to punish those who do wrong, and to oversee the orderly and efficient flow of justice.
But what happens when a judge bends the law or takes a bribe? It’s rare, but it happens.

A gang of thieves stage a daring heist from a vault deep below Princeton University’s Firestone Library. Their loot is priceless, impossible to resist.

Bruce Cable owns a popular bookstore in the sleepy resort town of Santa Rosa on Camino Island in Florida. He makes his real money, though, as a prominent dealer in rare books. Very few people know that he occasionally dabbles in unsavory ventures.

Mercer Mann is a young novelist with a severe case of writer’s block who has recently been laid off from her teaching position. She is approached by an elegant, mysterious woman working for an even more mysterious company. A generous monetary offer convinces Mercer to go undercover and infiltrate Cable’s circle of literary friends, to get close to the ringleader, to discover his secrets.

But soon Mercer learns far too much, and there’s trouble in paradise—as only John Grisham can deliver it.

Mackenzie Allen Philips’ youngest daughter, Missy, has been abducted during a family vacation and evidence that she may have been brutally murdered is found in an abandoned shack deep in the Oregon wilderness. Four years later in the midst of his Great Sadness, Mack receives a suspicious note, apparently from God, inviting him back to that shack for a weekend. Against his better judgment he arrives as the shack on a wintry afternoon and walk back into his darkest nightmare. What he finds there will change Mack’s world forever. In a world where religion seems to grow increasingly irrelevant The Shack wrestles with the timeless question, Where is God in a world so filled with unspeakable pain? The answers Mack gets will astound you and perhaps transform you as much as it did him. You’ll want everyone you know to read this book.

A single mother turns up dead at the bottom of the river that runs through town. Earlier in the summer, a vulnerable teenage girl met the same fate. They are not the first women lost to these dark waters, but their deaths disturb the river and its history, dredging up secrets long submerged.

Left behind is a lonely fifteen-year-old girl. Parentless and friendless, she now finds herself in the care of her mother’s sister, a fearful stranger who has been dragged back to the place she deliberately ran from—a place to which she vowed she’d never return.

Beware a calm surface—you never know what lies beneath.

Robert Langdon, Harvard professor of symbology and religious iconology, arrives at the ultramodern Guggenheim Museum Bilbao to attend a major announcement—the unveiling of a discovery that “will change the face of science forever.” The evening’s host is Edmond Kirsch, a forty-year-old billionaire and futurist whose dazzling high-tech inventions and audacious predictions have made him a renowned global figure. Kirsch, who was one of Langdon’s first students at Harvard two decades earlier, is about to reveal an astonishing breakthrough . . . one that will answer two of the fundamental questions of human existence.

Origin is stunningly inventive—Dan Brown’s most brilliant and entertaining novel to date. 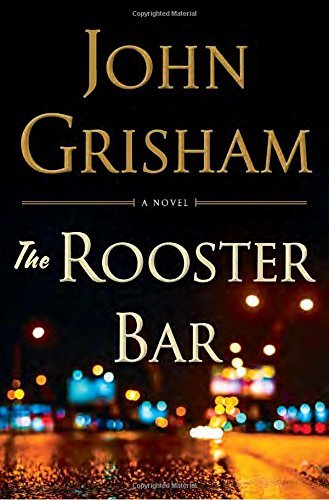 The Best Thriller Writer Alive’ Ken Follett There’s one last change for justice . . . They dreamed of changing the world. Instead they’re facing a mountain of debt and no hope of a future. Mark, Todd and Zola are starting to realise it’s not even worth graduating from law school. They’re better off hanging out at The Rooster Bar, plotting how to dodge the loan sharks. But maybe there’s another way. Maybe they know enough about the law to pass as lawyers. Because it turns out the crooked hedge fund billionaire who owns their law school also runs the bank that arranged their student loans. And it’s time justice was served. Even if it means taking on the FBI to do it . . .

#7 A Column of Fire (Kingsbridge)

In 1558, the ancient stones of Kingsbridge Cathedral look down on a city torn apart by religious conflict. As power in England shifts precariously between Catholics and Protestants, royalty and commoners clash, testing friendship, loyalty, and love.

The real enemies, then as now, are not the rival religions. The true battle pitches those who believe in tolerance and compromise against the tyrants who would impose their ideas on everyone else—no matter what the cost.

Set during one of the most turbulent and revolutionary times in history, A Column of Fire is one of Follett’s most exciting and ambitious works yet. It will delight longtime fans of the Kingsbridge series and is the perfect introduction for readers new to Ken Follett.

by James Patterson and Candice Fox

Harry Blue is the top Sex Crimes investigator in her department. But even she didn’t see this coming: her own brother arrested for the grisly murders of three beautiful young women. “For her own good,” she’s been sent to a desolate location and assigned to a new “partner.” But is he actually meant to be a watchdog? In her strange new home, Harry she vanishes in a place where no one would ever think to look for her.

by James Patterson and David Ellis

Billy Harney was born to be a cop. The son of Chicago’s chief of detectives, whose twin sister is also on the force, Billy plays it by the book. Alongside Detective Kate Fenton, Billy’s tempestuous, adrenaline-junkie partner, there’s nothing he wouldn’t sacrifice for his job. Enter Amy Lentini, a hard-charging assistant state’s attorney hell-bent on making a name for herself-who suspects Billy isn’t the cop he claims to be. They’re about to be linked by more than their careers.

An ingenious, inventive thriller about power, corruption, and the power of secrets to scandalize a city-and possibly destroy a family-The Black Book is James Patterson at his page-turning best.

The Bodine ranch and resort in western Montana is a family business, an idyllic spot for vacationers. A little over thirty thousand acres and home to four generations, it’s kept running by Bodine Longbow with the help of a large staff, including new hire Callen Skinner. There was another member of the family once: Bodine’s aunt, Alice, who ran off before Bodine was born. She never returned, and the Longbows don’t talk about her much. The younger ones, who never met her, quietly presume she’s dead. But she isn’t. She is not far away, part of a new family, one she never chose―and her mind has been shattered…

When a bartender leaves the resort late one night, and Bo and Cal discover her battered body in the snow, it’s the first sign that danger lurks in the mountains that surround them. The police suspect Cal, but Bo finds herself trusting him―and turning to him as another woman is murdered and the Longbows are stunned by Alice’s sudden reappearance. The twisted story she has to tell about the past―and the threat that follows in her wake―will test the bonds of this strong family, and thrust Bodine into a darkness she could never have imagined.

A heart-stopping tale of suspense, Daniel Silva’s runaway bestseller, The Black Widow, was one of 2016’s biggest novels. Now, in House of Spies, Gabriel Allon is back and out for revenge – determined to hunt down the world’s most dangerous terrorist, a shadowy ISIS mastermind known only as Saladin.

Four months after the deadliest attack on the American homeland since 9/11, terrorists leave a trail of carnage through London’s glittering West End. The attack is a brilliant feat of planning and secrecy, but with one loose thread.

House of Spies is more than just riveting entertainment; it is a dazzling tale of avarice and redemption, set against the backdrop of the great conflict of our times. And it proves once again why Daniel Silva is “quite simply the best” (Kansas City Star).

#12 Y is for Yesterday (A Kinsey Millhone Novel)

In 1979, four teenage boys from an elite private school sexually assault a fourteen-year-old classmate—and film the attack. Not long after, the tape goes missing and the suspected thief, a fellow classmate, is murdered. In the investigation that follows, one boy turns state’s evidence and two of his peers are convicted. But the ringleader escapes without a trace.

Now, it’s 1989 and one of the perpetrators, Fritz McCabe, has been released from prison. Moody, unrepentant, and angry, he is a virtual prisoner of his ever-watchful parents—until a copy of the missing tape arrives with a ransom demand. That’s when the McCabes call Kinsey Millhone for help. As she is drawn into their family drama, she keeps a watchful eye on Fritz. But he’s not the only one being haunted by the past. A vicious sociopath with a grudge against Millhone may be leaving traces of himself for her to find…